Get Social With Us! 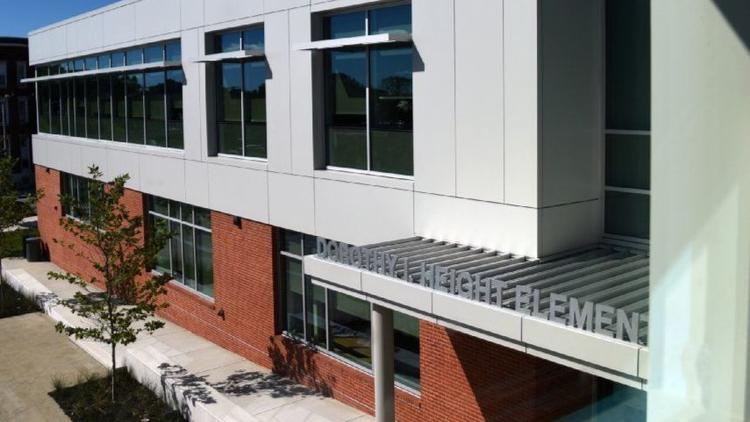 Baltimore Sun reporter Jacques Kelly recently visited Dorothy I. Height with architects from Cho Benn Holback & Associates to learn more about the school building's history and the process for creating the new building and renovating the existing structure. Read more. 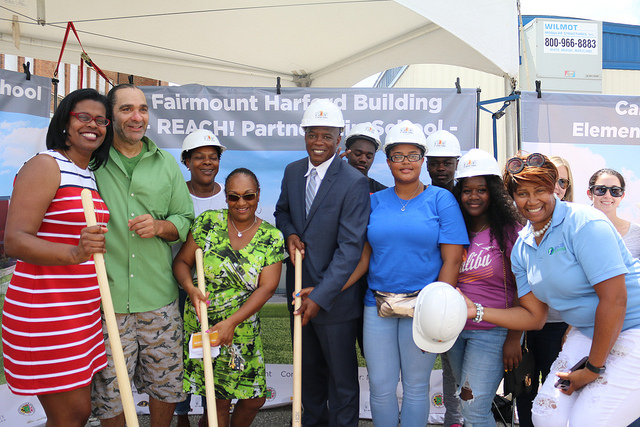 This summer marks a significant milestone in the 21st Century School Buildings Program as construction has begun on the next set of schools in the program. To mark this momentous occasion, students, staff, communities, and partners gathered at the Arlington School site on July 26 to celebrate this phase of the program.

Attendees took photos in front of large architectural renderings of schools where construction has begun or is set to begin soon: REACH! Partnership (Fairmount-Harford Building), Bay-Brook, John Ruhrah, Arlington, and Calvin M. Rodwell. Students from the schools addressed the crowd, sharing their thoughts on what a new school means and what they are most looking forward to when they begin at their new buildings. Lanyia, who will be in sixth grade when the new Calvin M. Rodwell Elementary/Middle School opens in 2020, told the audience, "I love my school but I'm ready for the new building." 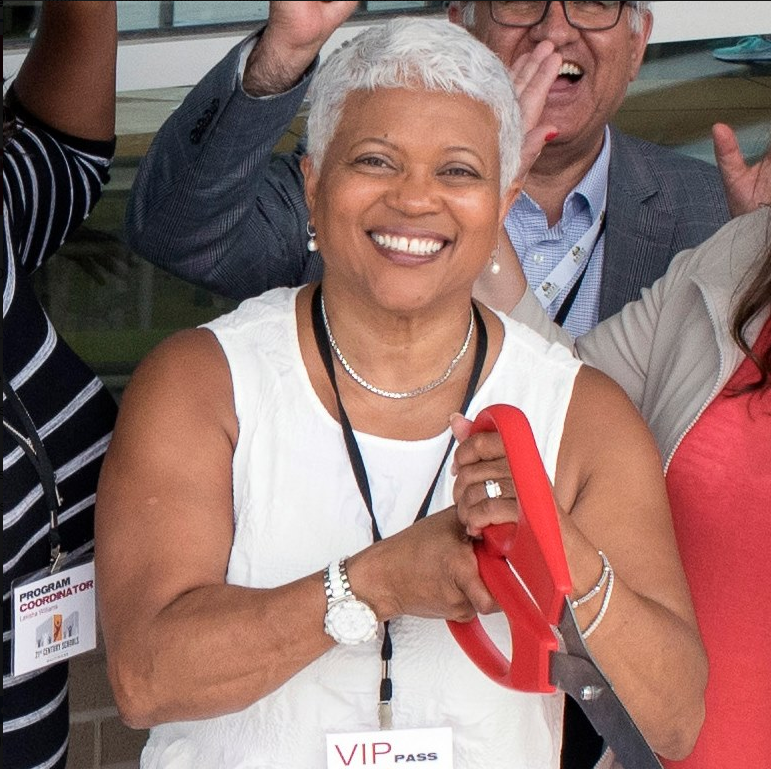 We thank Mignon Anthony, whose last day as Executive Director of the 21st Century School Buildings Program was Friday, for her leadership over the past three years. Mignon led with passion, tenacity, vision, and compassion. Although she will be greatly missed here, her legacy lives through the work we continue creating inspiring educational environments for Baltimore City and our public school students. Best of luck in your next venture, Mignon!

To leverage the investment of the 21st Century School Buildings Program, and to enhance the connection between the schools and the surrounding neighborhood, the Department of Planning leads a program called INSPIRE (link is external), which stands for Investing in Neighborhoods and Schools to Promote Improvement, Revitalization, and Excellence. This planning program focuses on the quarter-mile surrounding each school by generating improvements in housing, transportation, green land reuse, healthy food, and more. 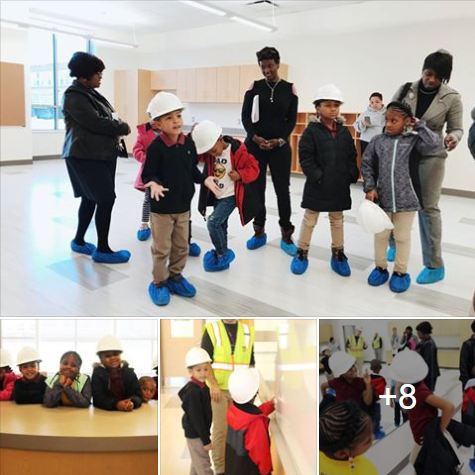 We had the pleasure of leading a group of young students on a tour of the new Arundel Elementary & Early Learning Center today. William, a first grader, said he couldn't wait to start at the new school--and we can't wait for students to learn in this inspiring environment either! 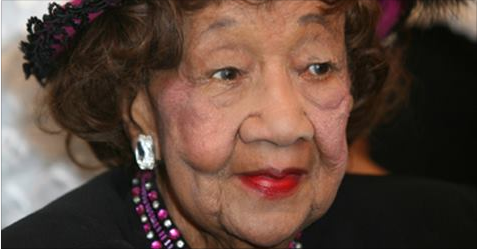 The new Dorothy I. Height Elementary School is set to open in Reservoir Hill very soon! How much do you know about the life and work of the amazing American leader that this 21st Century School is named in honor of?

Dorothy I. Height might be best known for her work in the 1960s alongside civil rights pioneers, including the Rev. Martin Luther King Jr., future U.S. Rep. John Lewis, and A. Philip Randolph. She was on the platform when King delivered his "I Have a Dream" speech at the 1963 March on Washington. Former President Barack Obama called Height a hero and the "godmother" of the movement, noting she "served as the only woman at the highest level of the civil rights movement--witnessing every march and milestone along the way."

Throughout her long life, she worked tirelessly to advance and protect the rights of people all around the country. Click the link to learn more about her work. 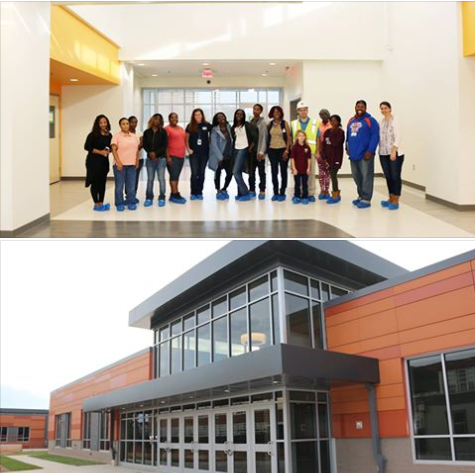 All smiles after getting a tour of the beautiful, light-filled Arundel Elementary & Early Learning Center. 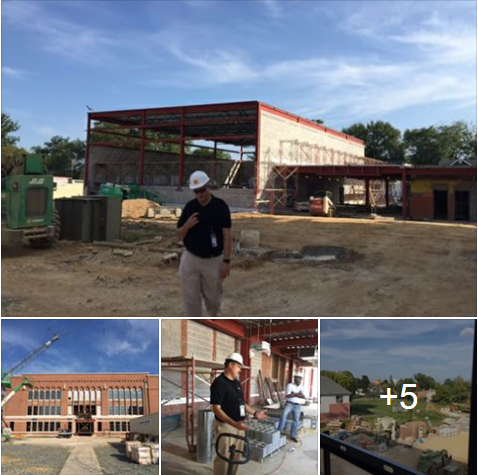 On September 25, 2017, a small group of Pimlico Elementary/Middle School staff toured the Pimlico construction site. They were excited to see all of the spaces that are planned for the new school. They especially loved the rehabbed auditorium and the natural light in all the classrooms. 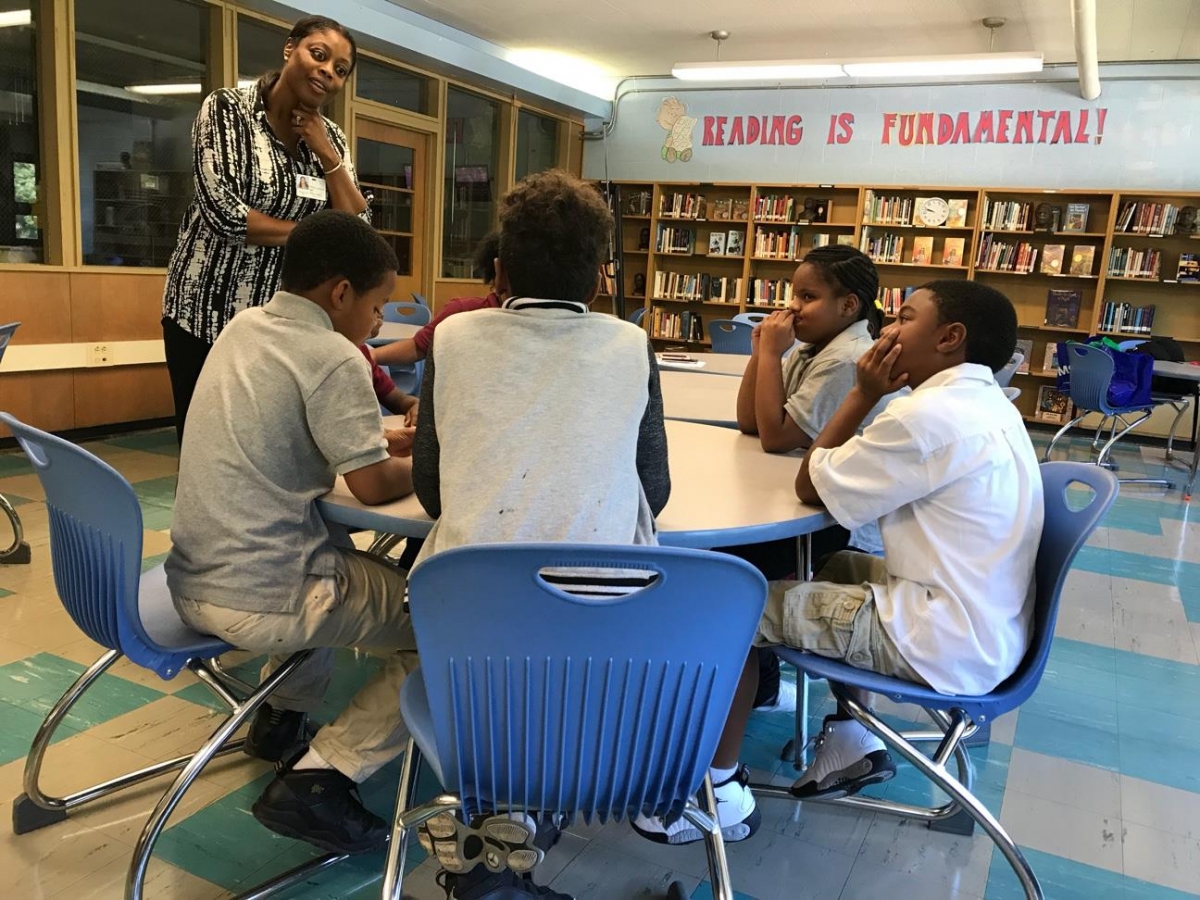 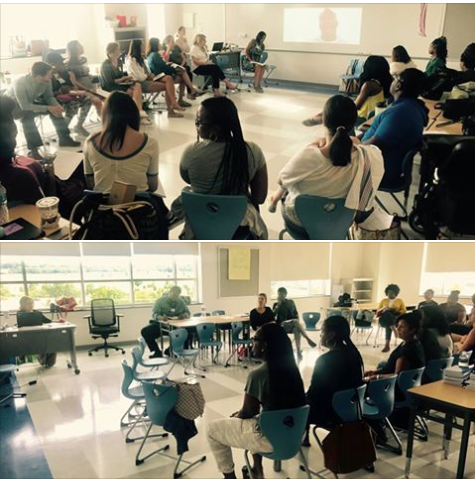 Delivering on the Promise Ribbon Cutting! 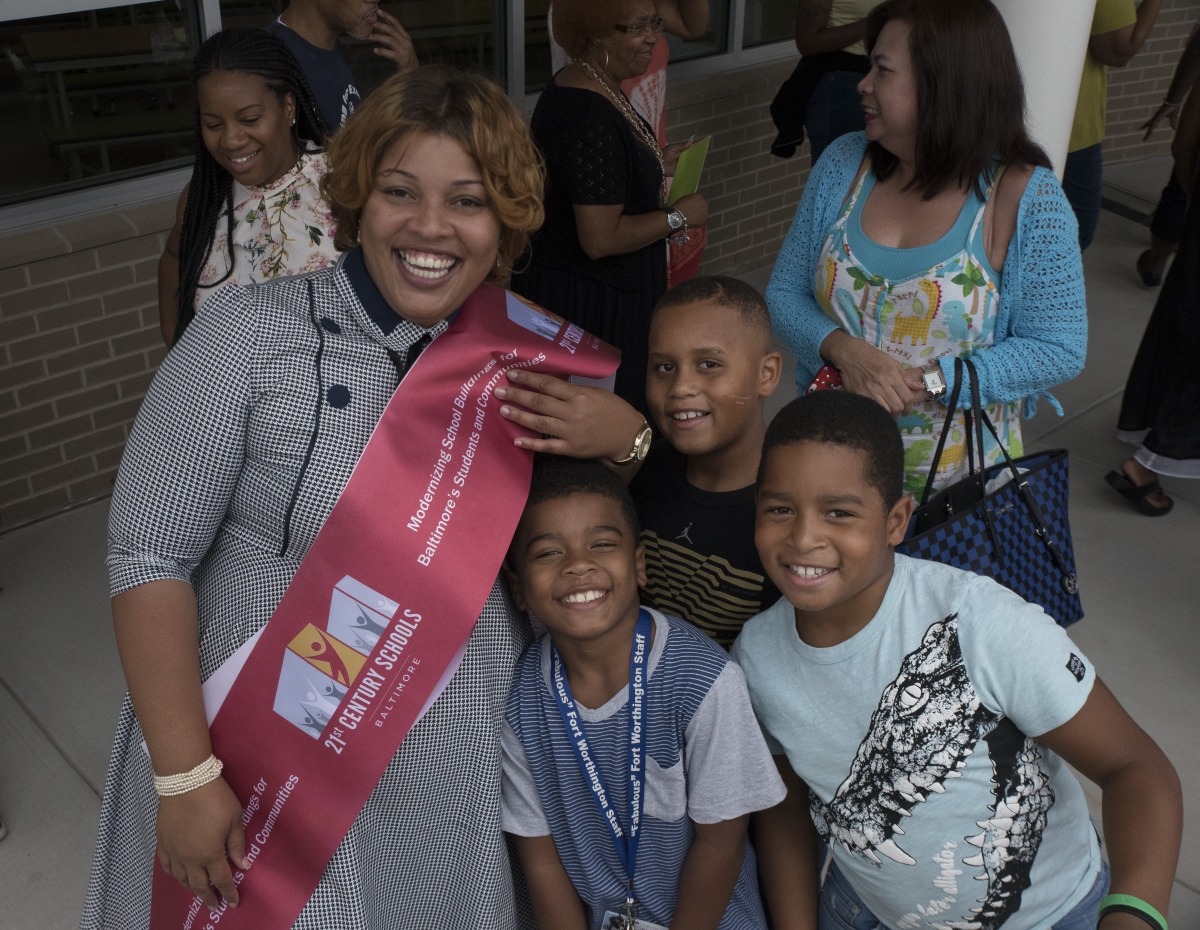 The 21st Century School Buildings Program celebrated significant milestones with a ribbon cutting at Fort Worthington Elementary/Middle School. Remarks were given by agency officials and a Fort Worthington middle school student - hundreds of community members participated in the festivities! Check out some of the 21st Century School Buildings Program: Delivering on the Promise! event coverage…

21st Century Schools for Our Children: Delivering on the Promise!

Please join us for a celebration of the 21st Century School Buildings Program on Wednesday, August 23rd, 10:30am – 12:00pm, at the newly constructed Fort Worthington Elementary/Middle School (2710 E. Hoffman Street, Baltimore, MD 21213). This event will also include the new Fort Worthington Elementary/Middle School’s official ribbon cutting. ARRIVE EARLY- The Ribbon Cutting will follow the program welcoming beginning at 10:30am sharp. THIS EVENT IS OPEN TO ALL!  RSVP HERE! 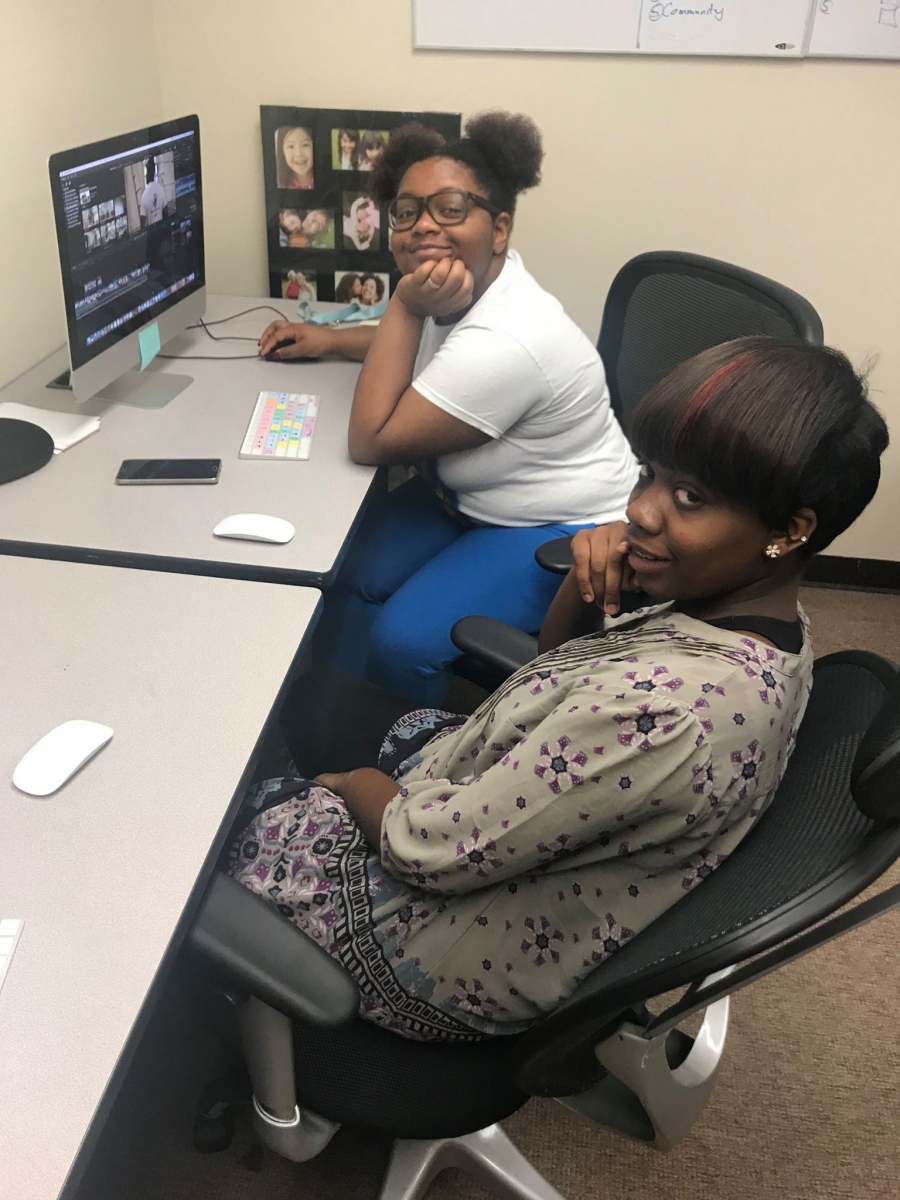 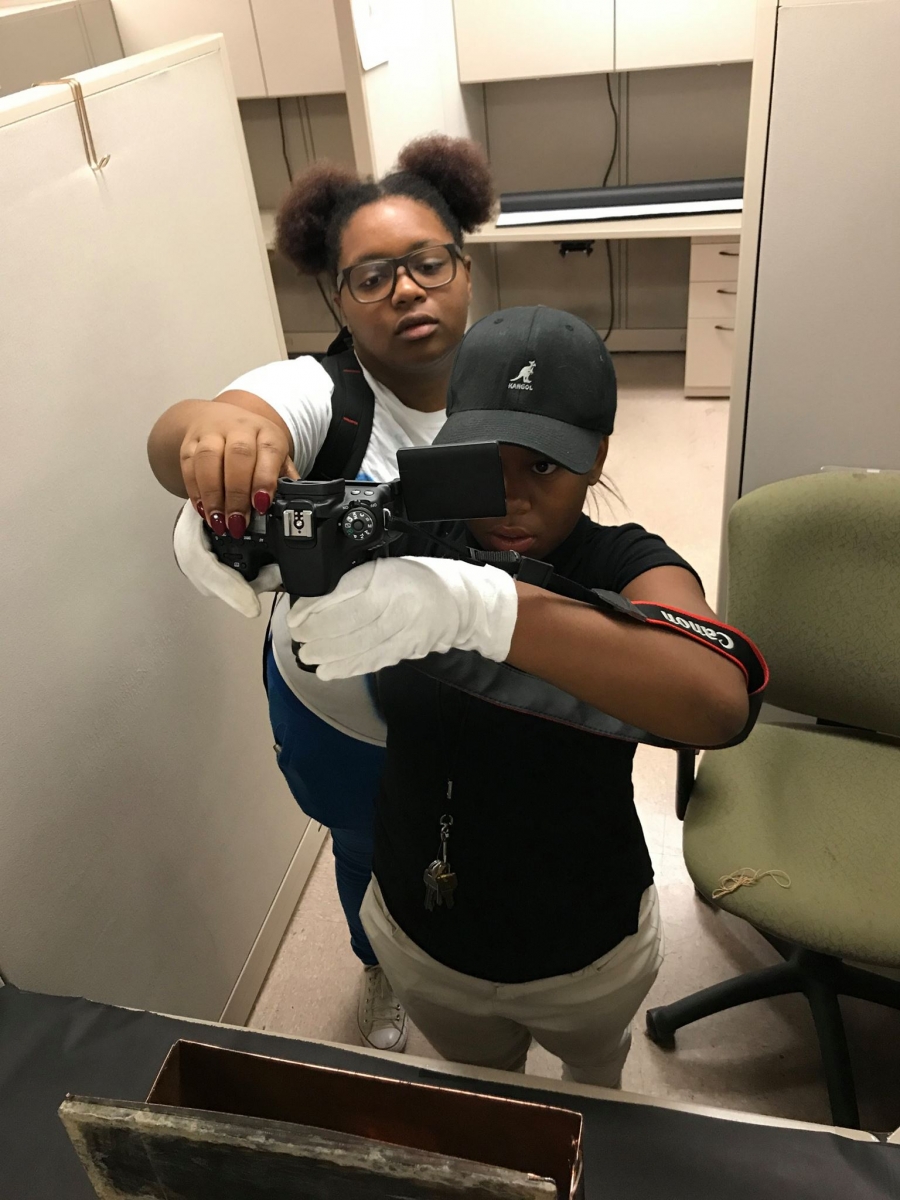 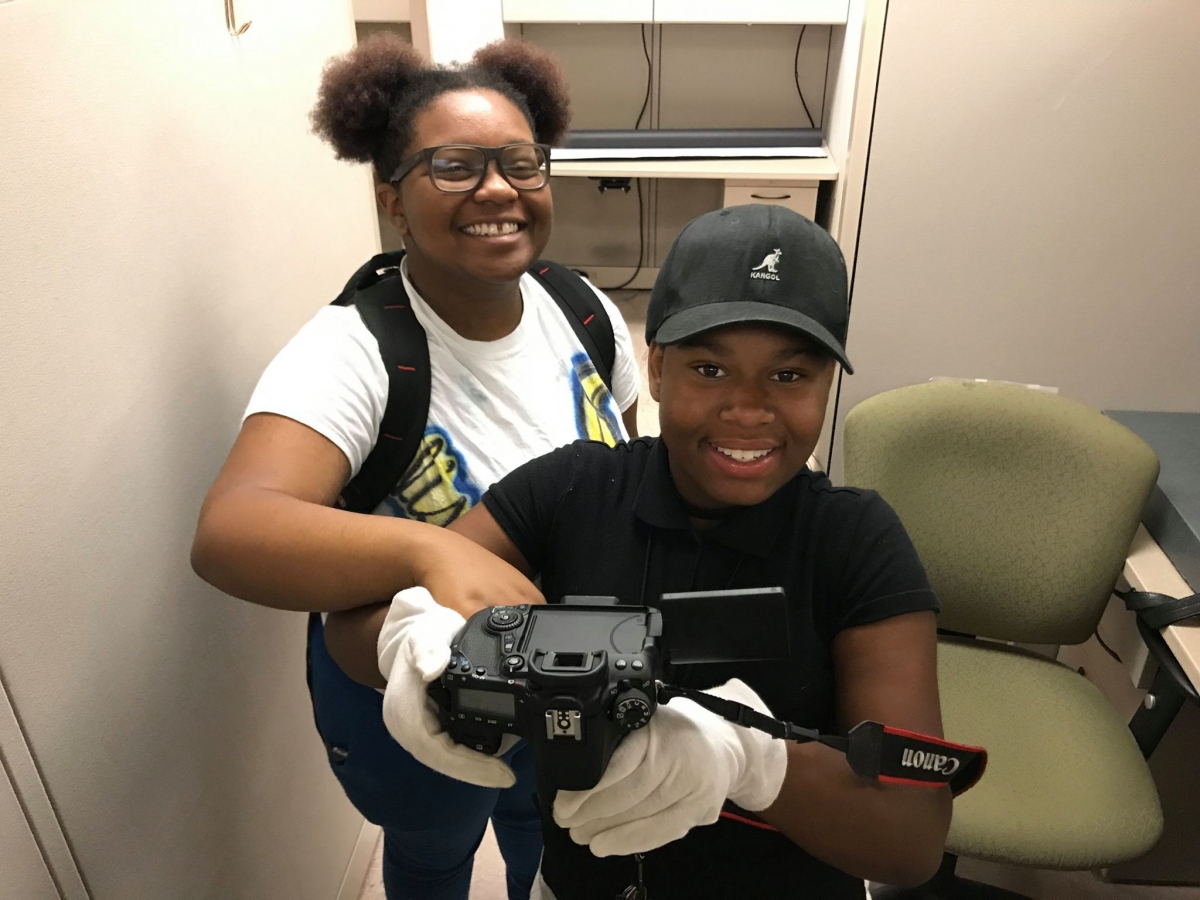 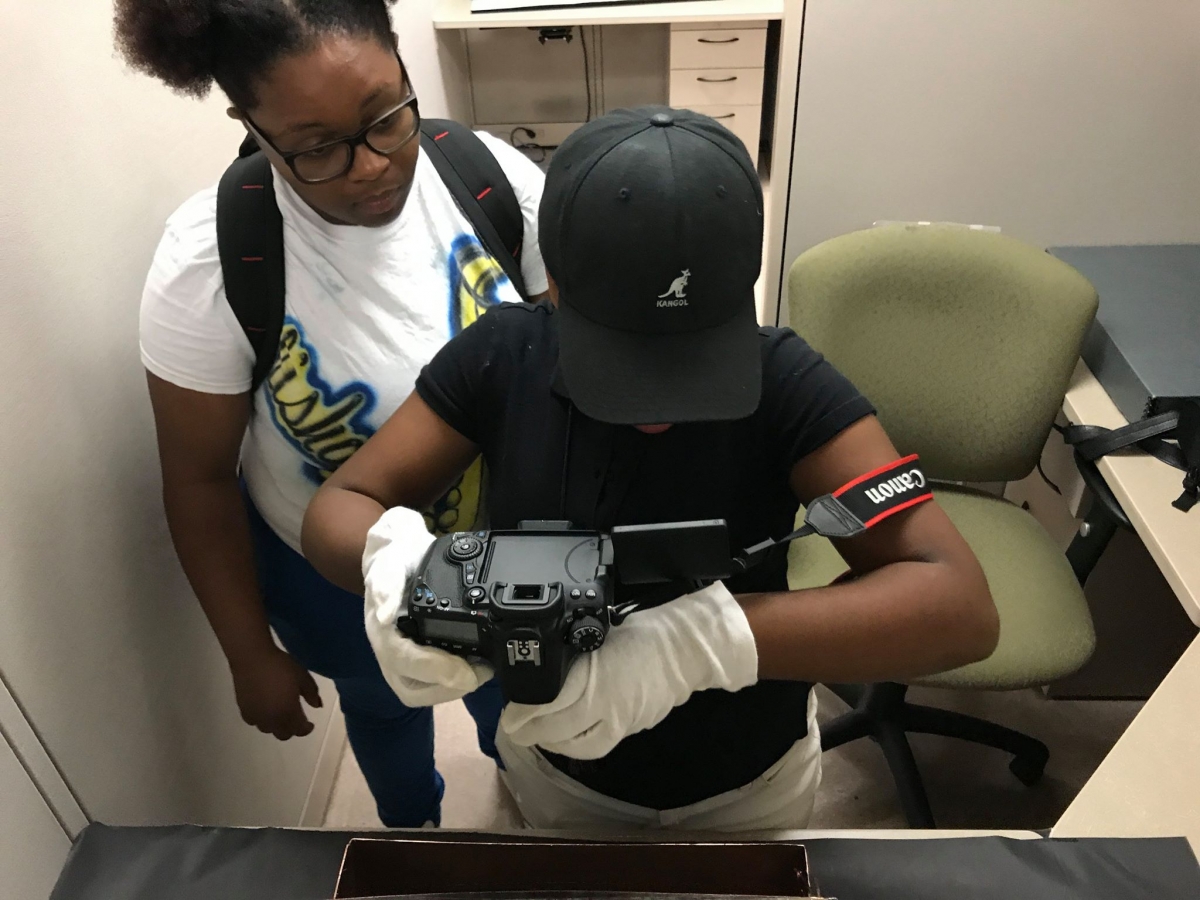 Mark Hill, graduate of Mergenthaler Vocational-Technical High School, is a 21st Century School Buildings intern through Urban Alliance. For more information on internships, contact Natasha Muhammad at nmuhammad@urbanalliance.org or at (410) 366-5780 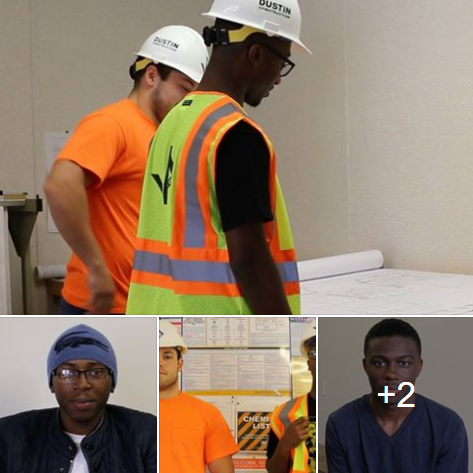 Rognel Heights students participated in the launch of the 21st Century's LEGO-Build activity. Students combined individually designed rooms/spaces to make one school building. This was followed up with discussion around the upcoming Rognel Heights and Lyndhurst merge. 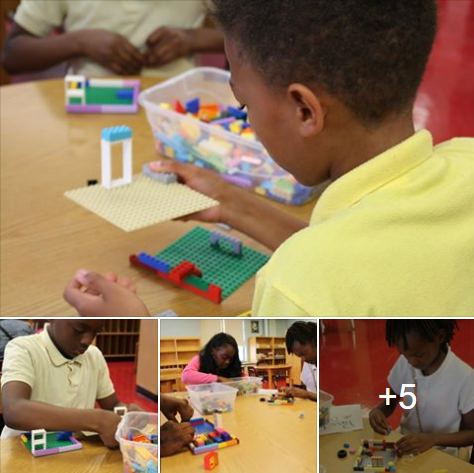 Jeremy Downey, a history buff and 4th grade teacher at Fort Worthington Elementary/Middle School, has volunteered to collect contents for a time capsule to be placed in the newly constructed school building! He's focused on ensuring that various stakeholders' voices are represented in the capsule for others to explore 50, maybe even 100 years from now. In this picture, Mr. Downey is looking at contents found in the 1963 time capsule found during demolition of the old Fort Worthington school building. 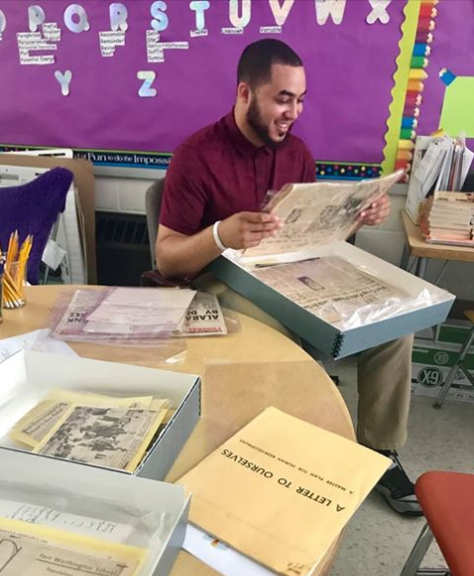 Learn more about our program partners by clicking on the link below: 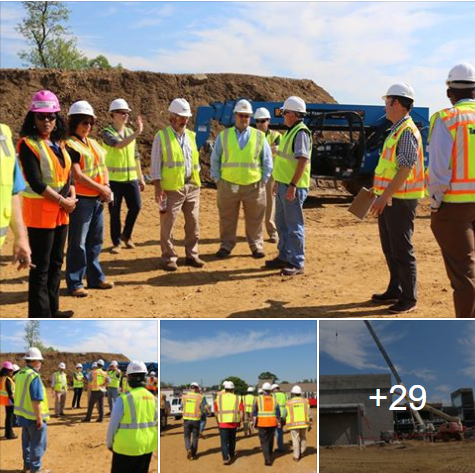 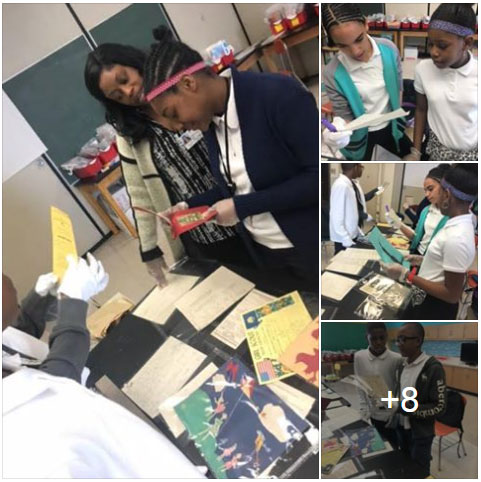 Building a Brighter Future, Together!

The Arundel Elementary School project has reached a major milestone. Structural steel is being installed- the erection of steel defines significant areas of the school building. At this point, additional trades will begin installing mechanical systems, electrical work, and plumbing piping. In the upcoming weeks, exterior framing will start and the building will noticeably take shape, resembling the final product! 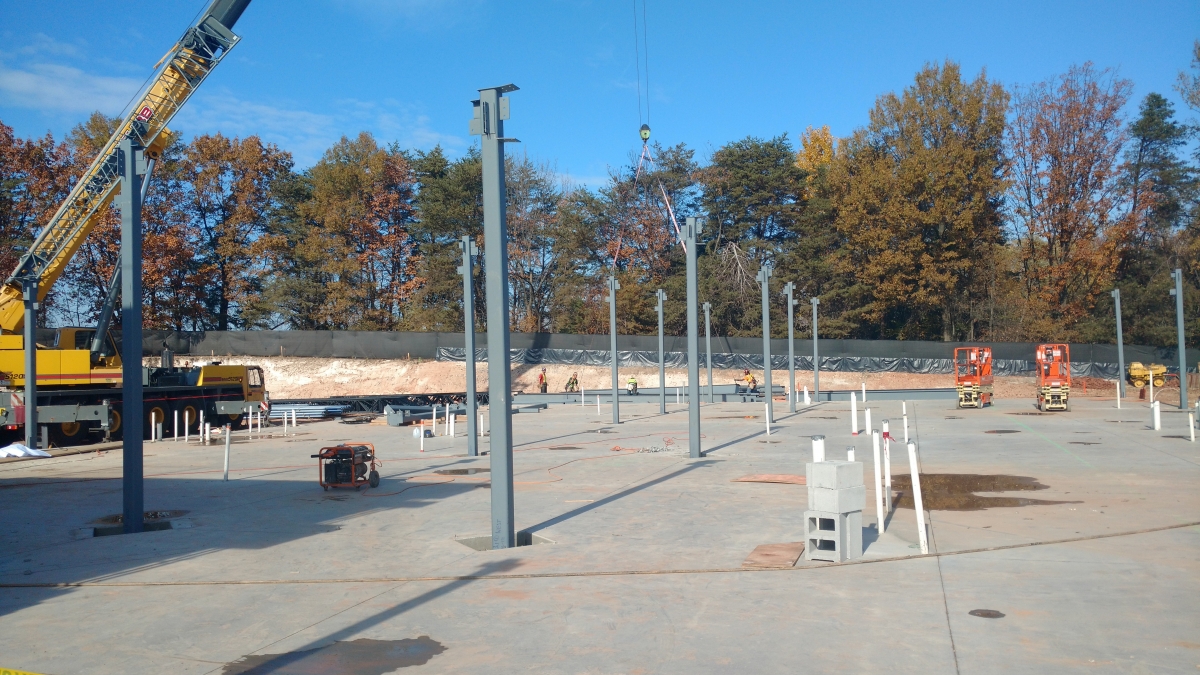 Progress on Fort Worthington and Frederick

The grounds where the Fort Worthington Building once stood has been leveled to receive the new building. Areas for future outdoor learning spaces and attractive landscaping are now defined.

Many trucks of concrete have been poured so far, completing about two-thirds of the foundations for the new Fort Worthington. Three of the walls for the Gymnasium and opposite the Cafetorium are now in place.

New service lines and pipes that will provide clean electrical power and filtered water throughout the building have been installed underground. And soon, steel beams and other structural frames and posts will be delivered to the site so that the building really begins to take shape. Watch the skies near Fort Worthington soon as construction workers will use a 200 foot tall boom crane to assist with the movement of these heavy objects on site.

The project is moving along on schedule and students are scheduled to occupy the new Fort Worthington Elementary/Middle School building, complete with innovative, high quality learning environments, in August 2017. 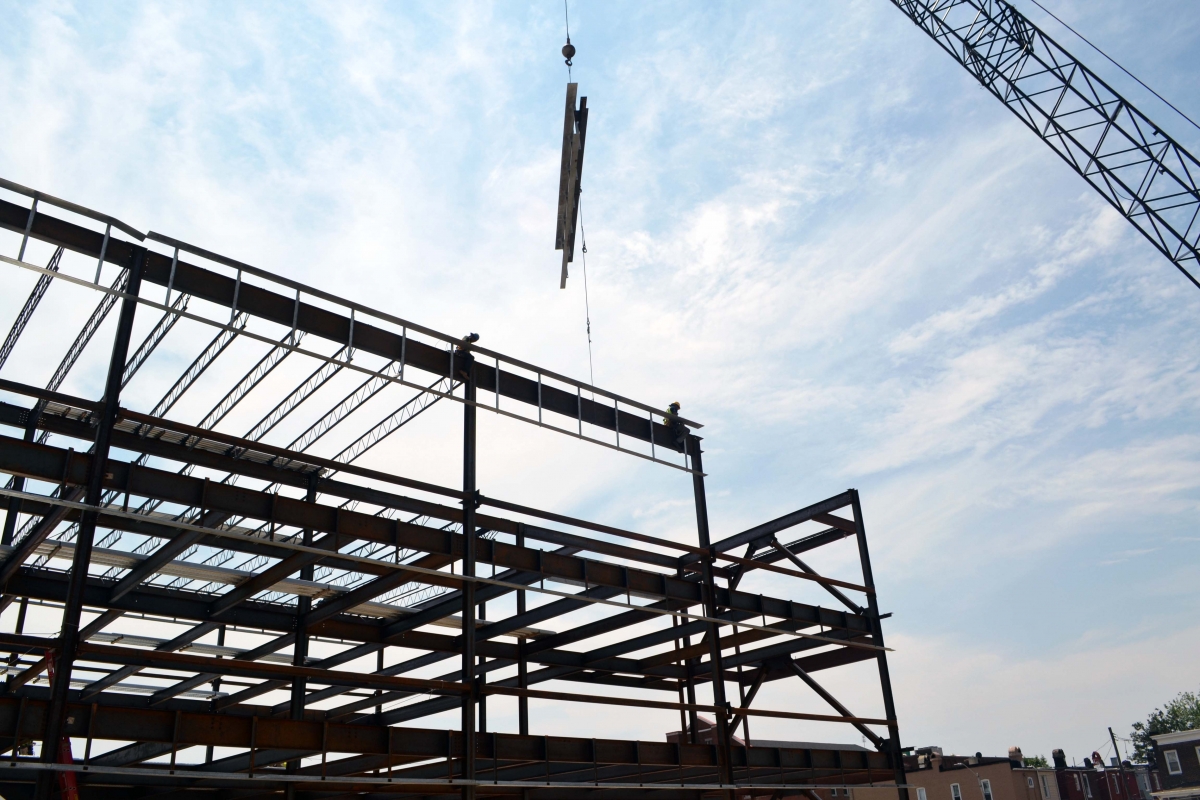 Frederick’s renovation is well underway. The construction office has been delivered and set-up and all demolition to the existing building is complete – leaving only a shell.

New service lines and pipes that will provide clean electrical power and filtered water throughout the building are being installed underground. Steel beams and other structural frames and posts have been delivered to the site and the new area of the building is really beginning to take shape.

These activities will be followed by plumbing and duct work installation, interior and exterior wall framing and electrical rough-in activities- electrical work that happens behind the walls. Exterior brick and roofing work is scheduled to begin in early fall.

The project is moving along on schedule and students are scheduled to occupy the new Frederick Elementary School building, complete with innovative, high quality learning environments, in August 2017.

The MBE/CM Outreach Event was held at M&T Bank Stadium on May 25, 2016. Construction Managers from Cherry Hill, Forest Park and Pimlico were present and had dedicated time to speak with MBEs about their respective projects. MBEs were afforded the opportunity to ask questions, submit their firm’s Capabilities Statement and network. 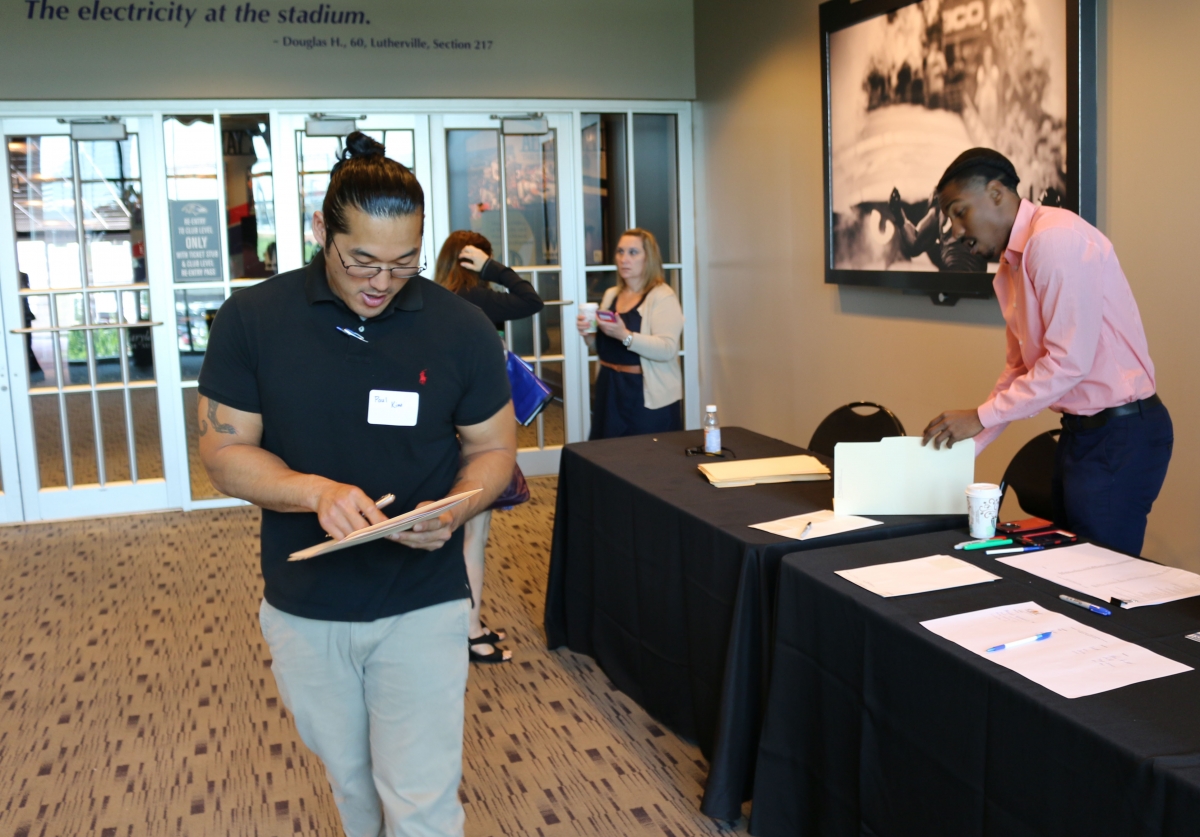 While earthwork is ongoing on the academic wing, Fort Worthington’s first block foundation wall is being installed and the school gym is beginning to take shape. In coming weeks the layout of the building will form and become visible from the street. This is a crucial step in preparing for steel and block walls on the west side of the building. 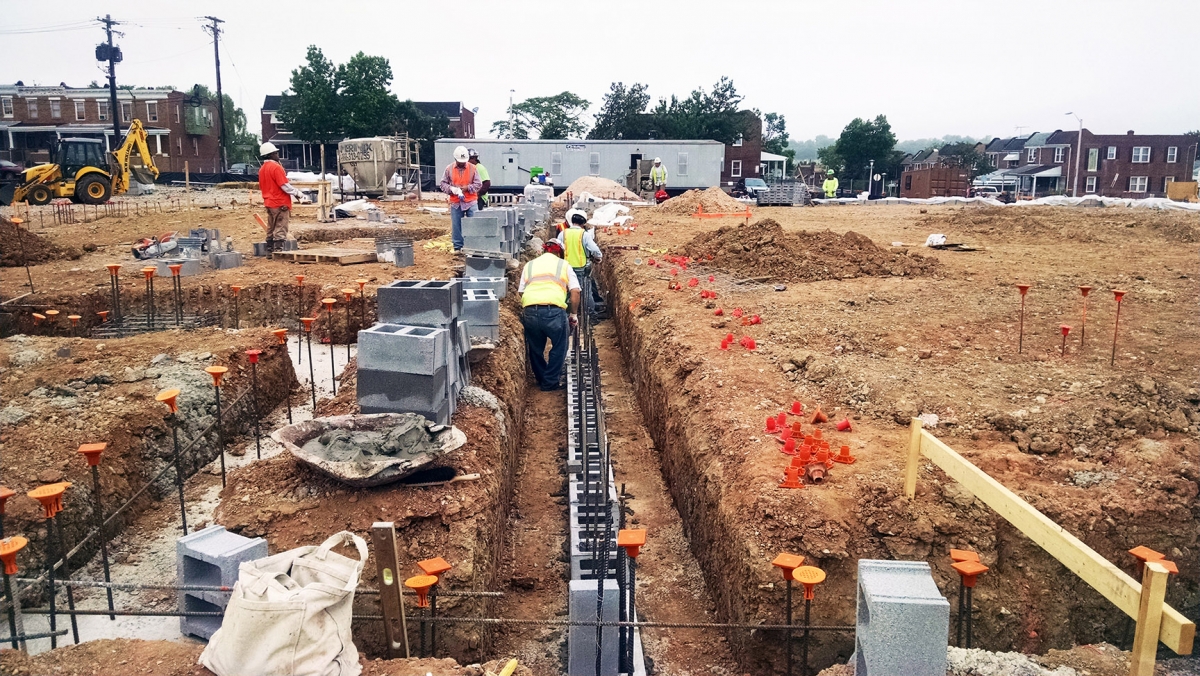 The Start of Frederick's New Addition

Structural foundation work is now underway on the Frederick Elementary School project. The above photos depict concrete being placed for the building foundations. The process entails excavating soil, installing steel reinforcing and placing concrete. Once the concrete foundation cures (hardens) it will support a portion of the weight of the new building. 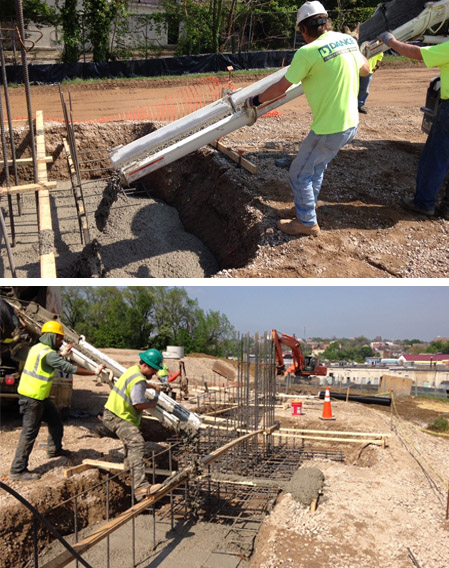 To leverage the 21st Century School Buildings Program investment, and to enhance the connection between the schools and the surrounding neighborhoods, the Department of Planning launched a new program called INSPIRE (Investing in Neighborhoods and Schools to Promote Improvement, Revitalization, and Excellence). Read more about the INSPIRE program.

Through community workshops, surveys, and walking tours, over 150 stakeholders in the area of John Eager Howard School have helped inform the draft recommendations presented in this draft report.

Demolition of Frederick Elementary School and Fort Worthington Elementary/Middle School is scheduled to begin in January, 2016. Students and staff have relocated to temporary school buildings and will return to their 21st Century school in August, 2017. Click here for updates on the status of all Year 1 Schools.

Check out these exterior renderings of Frederick Elementary School.